Whitby Abbey will once again be illuminated for half term week in October. A chance to see the Whitby Abbey Illuminated and aglow with coloured floodlights highlighting the magnificent ruin that inspired Bram Stoker.

A fantastic event for all the family and one of the highlights of the events calendar here in Whitby. Cast light on a dark history! See Bram Stoker’s inspiration in a new light as Whitby Abbey is bathed in dramatic illuminations. As you explore its gothic splendour, our costumed characters will introduce the darker side of the past with tales of grave robbing and witch trials. You can also experience a live performance of Dracula to complete your visit. Halloween fancy dress is encouraged! 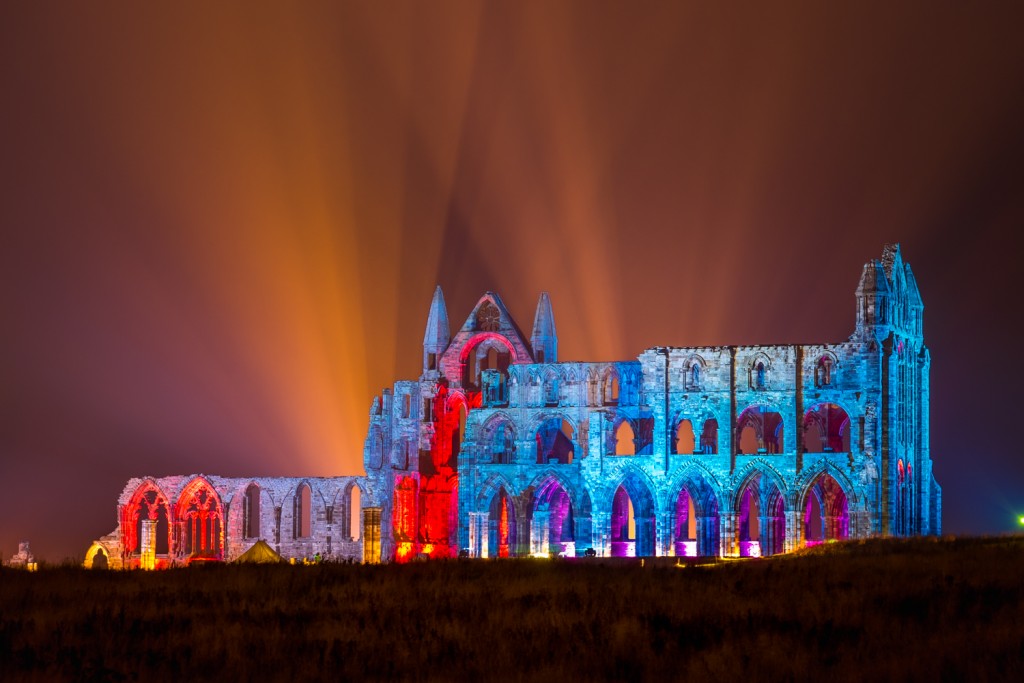 The Illuminated Abbey event at Whitby, North Yorkshire becomes more popular each year that passes. The event provides fantastic opportunities to capture some really special images of one of the countries most well known and famous landmarks. The number of people wanting to photograph the event grows year on year too. This is a short guide written by myself with a few tips on photographing the event.

By no stretch of the imagination do I believe that my way is the only way, nor do I believe that I am the best, that really is not what I’m about. But if this helps a few people then I will have achieved my aim.

For many, the Illuminated Abbey Event may be their first attempt at Night Time Photography. To capture anything half decent then you really need to have at least a grounding in Night Time Photography. There are many better photographers than myself who can teach you these techniques. A simple Google Search will give hundreds of articles and videos on the techniques involved in capturing photographs in the dark.

The number one item if kit you will need is a Tripod. I can not stress this enough that the key to success at night is a tripod, without it, you will fail, and you will fail badly.

Time and again I see photographers with mobile phones or hand held cameras. Many will even post their images on social media, and some might even be told by friends and family that they are “amazing”. So many times on social media you see the superlatives flying about. Sadly the images are really poor. Thats the reality of it. I don’t want to sound big headed or negative about what you have done, but in reality, your mum, dad and work colleagues are always going to love your photographs, thats not because they are great photographs, its because they love you.

So, The crooks of the matter are, you need a tripod. Once you have that, the rest should come pretty easy.

Why Do I ned a tripod you might ask ??

Well to take successful images at night, you need a long exposure, you need to keep the shutter open for a number of seconds, sometimes even minutes. Even the steadiest of hands shake and your camera pics up instantly on the slightest movement, and then you have blurred photographs. No amount of editing can correct a badly taken image. All those special apps you see in the app store and google play are of no use to you. Instagram Filters and effects will never un-blur your image. Once it is blurred, it remains blurred.

As mentioned, there are many tutorials on Night time Photography, you might want to read a few before heading out to The Illuminated Abbey. My tips would be, Keep the ISO as low as possible. Basically the lower ISO the better the image. There are many who will argue that they get great images at extremely high iso. Indeed this can be very true, but those same people would always have got an even better image at a lower iso. Plus, the types of cameras that produce the best images at the higher iso range are the very expensive ones. Many of you wont have that budget.

I noted that red always seemed to lack detail in the stonework of the Abbey. What I was told, I think, is that red is a lot more an intense, bright colour and as such burns out a lot quicker. So what I was seeing was a normal exposure, but anywhere there was red light, the highlights of the photograph were totally burnt out, unrecoverable.This year I intend to try and really underexpose the reds. I will feedback on how that goes.

In the past 2 or 3 years I have not entered the Abbey during the event. This probably wont sit well with English Heritage, but by far the best place to photograph the abbey is from outside the grounds. Unless English Heritage introduce a Photographers night, I don’t really see that situation improving.

Perhaps a good idea would be to attend the event, and then as you leave spend maybe an hour or so capturing some images from a distance. Or if you live in Whitby, or are staying here then maybe have a photography night inside the Abbey Grounds and another around the town.

With the people in mind I have found recently that the better shots seem to be found outside the grounds of the Abbey, sometimes as far away as a a mile or more.

So whilst your driving about Whitby in your car, or on foot in the town, take note of the views and work out how you could capture the Abbey from viewpoints around the town.

Dont Be Frightened to Zoom For Detail

In recent years, English Heritage have started adding some variety to the event by projecting shapes such as bats and cobwebs onto the walls of The Abbey. These work as great features in your photographs. Don’t be afraid to zoom in. 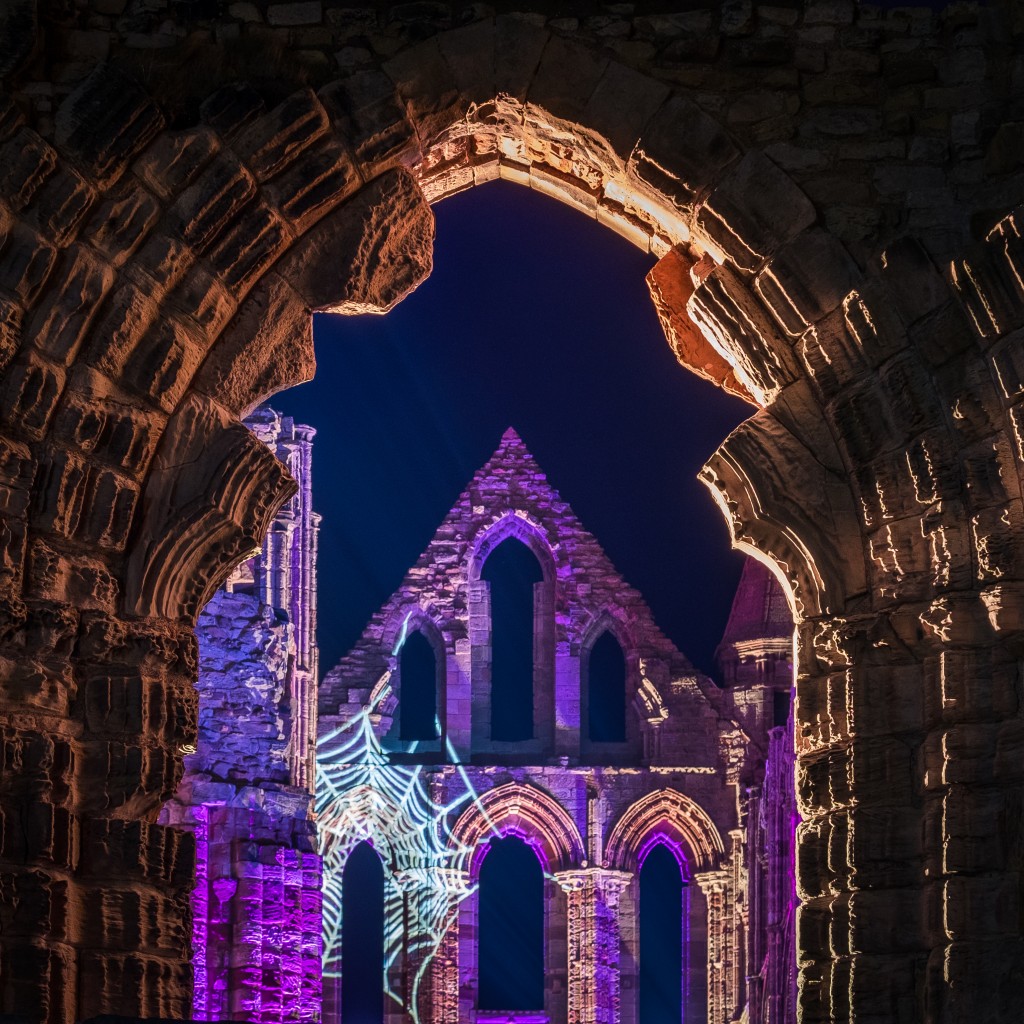 In summary, I think its pretty easy to sum up what I’ve said in just a single sentence. Watch those colours, Always use a tripod, you don’t have to be in the abbey, and detail can work well.

I hope you all enjoy the event this coming autumn.

Read more, whats on posts on our website, right here.

Other Events In North Yorkshire