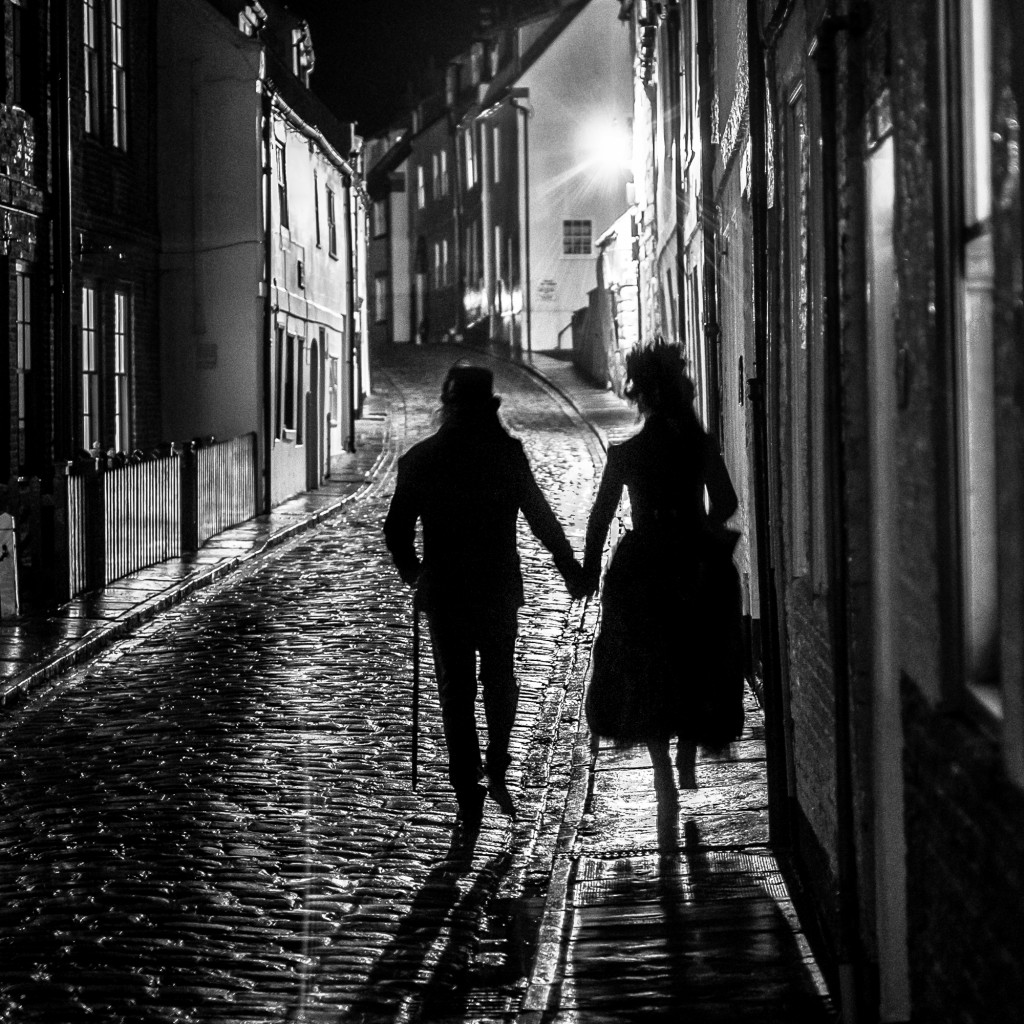 Photography By www.whitby-photography.com – Whats On In Whitby

The History Of Whitby Goth Weekend

The WGW’s official line is to provide musical entertainment with bands and DJs, although the culture of the WGW has far outgrown that simple agenda. Whitby Gothic Weekend, often abbreviated to WGW or simply referred to by attendees as Whitby, is a twice-yearly festival for goths in the beautiful seaside town of Whitby North Yorkshire.

The event is organised by Jo Hampshire who runs Top Mum Promotions. The roots of the Whitby Goth Weekend rest with a group of around forty pen-pals who had met through New Musical Express Magazine  The group of friends first came to Whitby in 1994. Whitby was the choice venue because of  its Dracula connections.

In the following years the locals came to accept the event and the goths were welcomed back on a yearly basis, before the event became a twice a year weekend in more recent times.

As usual when discussing photography tips I must state by in no way do I proclaim to be the best photographer around, or even to be half decent. There are many more photographers out there far better and far more capable than I am. I simply pass on tips based on what I know about photography and our home town.

Depending on who you ask at the church, you will normally get a diversity of answers regarding the Church’s official policy on photography within the graveyard of St Mary’s Church on The Abbey headland.

Through my own personal discussions with the church wardens I have been told that photography in the graveyard is not strictly out of bounds. Indeed one warden explained to me quite logically that Whitby families and indeed visitors to the town have taken photographs in the graveyard for decades, so why should there be a specific policy banning it on Goth Weekend.

It would appear that the Church are fine with people in the Graveyard for the purpose of photography, so long as they stick to the photographs, behave respectfully and don’t touch or lay on graves.

Although there clearly seems to be a problem with some attendees of the Goth Weekend disrespecting the Church, I would say the main problem is most certainly the photographers behaving like a pack of hounds chasing young female goths around the graveyard and asking them to pose on gravestones.

Over the years I have seen some quite obtuse behaviour, with photographers touch young ladies and getting them to pose provocatively for the camera. Watching the men behave in this way makes me believe a large percentage of them are quite perverted in the ways they conduct myself.

If I was attending Whitby Goth Weekend as a Goth or to take photographs, I would distance myself by a significant distance from the group of slimy old men who hang around the graveyard. You can be sure that the Church arent happy with what takes place and nor are the local community in Whitby.

Get Off The Main Streets

When I first started photographing The Goth Weekend at Whitby, it was simply a case of point and shoot, with an aim of capturing as many Goth faces as possible. When I look back now, I have a hard drive full of not very much at all. Thousands of photographs of uncomfortable looking goths staring down my lens.

One of the main problems over a Goth Weekend is the sheer amount of people and clutter. If your wanting to take portraits it makes for extremely hard work when there is so much going off behind your subjects.

Given some forethought and planning you should be able to get better pictures by selecting individuals and asking if they would possibly let you photograph them in one of the side alleys or yards.

One of my favourite places for photographs is on Henrietta street or even the east pier. With less people there it often makes for awesome shots.

Some of my personal favourite photographs are those taken with a flash, or a permanent light or even a light reflector.

Although I haven’t used my flash gun for a lot of years at The Goth Weekend, I certainly think many of my best pics were taken whilst using it.

It could be a great idea to add a new dimension to your goth weekend photographs by introducing some light.

Set Yourself A Project

If, like me, you have become a little bored with simply snapping the goths, it can be quite fun to set yourself a small project for the weekend.

Over the past few years I have worked to several themes. One year I simply photographed the crowds. Walking around town I identified the really busy places and set about capturing a record of the sheer volume of people who came to Whitby that weekend.

On another year I photographed “Detail”…. Shoes, Boots, Coats, Badges, Patterns on clothing were my focus. This proved quite difficult for me as it often needed permission from the person involved for me to be able to get in close.

I like to work 100% candid if at all possible, but that approach simply is not going to work if you want to get down on the floor and photograph someones boots. Infact you could well end up with a kick square across the jaw if you dont get permission first.

The project that I believe got the most attention was the year I turned the camera on The photographers at Goth Weekend. I’m not sure how the photographers felt about it, but it certainly went down with members of my Facebook Group.

Don’t Forget, Other Things Are Happening Too.

As well as the town being packed with a diversity of interesting characters, there are many other things happening over the goth weekend too. Don’t forget the Gothic Car Rally, The Goth Football Match and of course The Whitby Illuminated Abbey event at The Autumn Goth Weekend.

After posting some of my images to Facebook and reading some of the most bigoted and disrespectful comments Ive ever had the displeasure to read, I have decided to dedicate all Goth related pages and photographs on this website to the memory of the the late Sophie Lancaster. I urge all our readers to show respect and tolerance to all people we meet regardless of their looks or chosen attire. You can read about Sophie here.

Whitby Goth Weekend On Church Street. A Great Place To Hang Out

You can view photographs from all The Whitby Goth Weekends Here.

Whats On At Whitby Goth Weekend

This site uses Akismet to reduce spam. Learn how your comment data is processed.